My Own Worst Enemy

The thing about life,is that it continues to go on no matter how you feel.
It doesn't care if you don't want to get out of your bed.  Life isn't going to stop because you're going through more than you believe you can take.

I was getting overwhelmed by mid December.
Mom's cancer and her treatments were enough to overwhelm anyone.
I tried my best to handle everything well.
I admired mom's strength and often wondered how she could handle this as well as she was.
She had her days, but for the most part,she persisted on as if she wasn't a newly diagnosised breast cancer patient.

I felt selfish most days because all I could think of in the more intense moments of panic was ,I am 15. I want to go back to how things were before cancer.
I want to party and be with Chris as much as possible without feeling guilty.
I want to enjoy the new life I was given just months before this hell began..
If I felt that way, I can't imagine how mom felt. She was the one with breast cancer. Fighting for her life.
So many emotions at one time to a 15 year old is hard to handle.

So I did what I knew best and I would seek out a temporary fix.
The miracle in a pill bottle that I had discovered a year or so before .
I didn't have to look hard or go far.
All of my friends were older and I had access to anything I wanted.

That would do the trick for a few hours and then it was back to feeling feelings again.
Something I hated.

Things had been going great with Chris and I.
I was so thankful for him and I knew he was who I wanted to be with.

He and I discussed our future together and I meant what I had said but because I had always been let down, I honestly didn't take him extremely serious about wanting to marry me.
Deep down, I knew he would eventually leave me too. It was a waiting game in my mind.
His actions matched his words but I was used to con-artists and figured he was just really good at pretending to love me.

I had good reason for why I felt that way and for not trusting any male .

When a girl isn't wanted by her own dad, her self-esteem isn't the greatest.
If my dad left me, why would any other guy stay?

It didn't help that I was cruel to myself.
I'm my own worst enemy and I would tell myself that it was my fault and I wasn't loveable.
Telling yourself those things after awhile, turns into your own reality.
It'll also drive you mad. .

My pain from the past would always come up.
Like an unwelcomed ghost that refuses to cross over.
My current situation and the demons of the past were enough to keep me down ,with no hope of anything getting better.
No matter how hard I tried, I didn't feel okay unless I had a substance in me or was with Chris.
Even then, I told myself,it wouldn't last.

I wasn't sure how I was ever going to be ok.
So I took it a day at a time and dedicated myself to trying to escape the reality of everything and enjoyed any genuine moments that I could.
I often told Chris that he had no idea what he had gotten himself into. 😏
And his response each time was
" Stop trying to push me away. I'm not going anywhere,no matter what. I don't care how tough it gets, I'm with you to stay".
I believed him.
I just had the voice inside that reminded me of others who also promised to stay.

I wasn't winning the battle within me...

I accepted that I wouldn't ever be stable and decided I would ride the train of life untill it derailed... 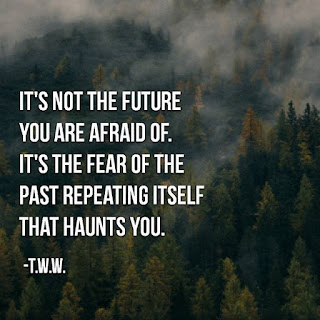